Member Spotlight highlights Central PA PRSA Members who have displayed exceptional creativity and skills within their field or Public Relations.

If you know of any members who have represented their clients or company in an outstanding way, please let us know so that we may share their achievements with the chapter! 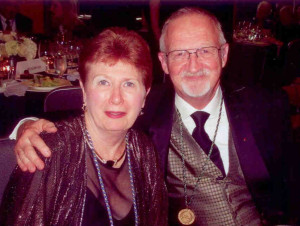 Bob and Deborah Saline could be called the “dynamic duo” of our Central Pennsylvania Chapter. Both have achieved their APR and have been named to the PRSA College of Fellows. Both have served PRSA in leadership positions locally and nationally. Bob is a current co-chair of our chapter’s APR committee, and Deborah is a site reviewer for PRSA’s Certification in Education for Public Relations (CEPR). Both have mentored others in the profession and continue to be PRSSA chapter advisors.

Since 2002, the Salines have owned PRworks, a PR consulting firm on the West Shore that served local, national and international clients. PRworks in January, 2015, was acquired by its long-time strategic partner Intrada Technologies, Inc., of Williamsport, Pa., which offers search-engine-focused Web development, Internet marketing PRO-Active computer and network support, hosting and cloud services. The two firms have often worked jointly as counsel and support to PRworks’ and Intrada’s clients.

The PRworks brand will continue with Bob as chair and senior counselor. He and Deb also will continue their association with our chapter, which is fortunate, since they are eager to share their lifetime of PR experience with those just starting in the profession.

Deborah recalls that her major in college was journalism, but she had taken some PR classes. While on her first job at a newspaper, she discovered she was not as satisfied with reporting as she had been while working on assignments in her PR class. She made the switch in careers while Bob was serving in the military.

Attending the 95th birthday party for PR’s “founding father,” Edward Bernays, hosted by PRSA, set Deborah on the path to following professional standards and pursuing her APR. She picked up a copy of PRSA’s Code of Ethics at the event, and it helped her to say “no” to employees and clients because she was able to point to the ethics of her profession rather than her personal opinion when advising on a course of action. Deborah went on to serve PRSA and the Universal Accreditation Board by being part of the re-engineering of the APR coaching and examination process.

Bob said Deb found him his first job in PR through a PRSA contact when he finished his military service, and calls her his “mentor” in those early years. For him, the process of preparing for his APR, which included coaching by Fred Leuschner, a well-known PR professional in Central Pa., opened his eyes to the strength of the four-step process of research, planning, implementation and evaluation over the practice of gathering information and sending out news releases.

“I learned to answer the question, ‘What makes you think this will work?’” Bob said. “Pretty soon I had people coming to me for research before they began a project.” That led him to leave his 20-year corporate position and becoming a PR counselor in a previous firm and, later, the founder of PRworks. It also led him to be an advocate for APR in our chapter and to become a coach in our APR preparation workshops and across the nation for PRSA. He will have further input into the development of future PR professionals as adjunct professor of public relations at York College.

“Early in our careers we often debated whether public relations is a profession or a job,” Bob said. “For both Deborah and I, it is a calling.”

“Bob and Deborah have been lifetime advocates for PRSA both locally and nationally, and we congratulate them on this new chapter in their lives,” said Liz Smith, president of our chapter, chair of the PRSA Mid-Atlantic District and president of Integrated Communications Ventures.

How/Why did you get into the PR profession?: During my coursework for my Master’s Degree, I took a class in public relations. It introduced me to public relations’ unique mix of creative thinking, storytelling and business savvy. I thought, this might be just right for me, and my first job in PR confirmed it.

Most unusual/successful/funniest PR project you did?: To promote Chris Hedges’ book American Fascists: The Christian Right and the War On America, I produced a live-audience debate in Toronto between Hedges and a little-known Canadian T.V. evangelist. Somehow, I got Hedges to agree to do it, against what he said was his better judgement. I took a risk that paid off in the end. The event was standing room only and swarmed by the media.

Do you have your APR?: Yes

How has that helped your PR work?: The process was an extremely eye-opening experience for me, because it gave me a broader and more strategic perspective of public relations. I am better at what I do because of it.

Best career advice you’ve ever received: If you expect things to be hard, they will go much easier for you.

What do you do for fun?: Garden, cook, read, spend time with my family.

Through which media do you get your news?: Many, but the essentials are Lancaster Newspapers, New York Times, Chronicle of Higher Education, Philadelphia Inquirer, Twitter.

How/Why did you get into the PR profession? My bachelor’s is in radio/TV journalism and I worked several years as a radio reporter. I got tired of radio stations doing away with local news (and subsequently getting laid off), so moved to the much more stable world of PR and higher education.

Most unusual/successful/funniest PR project you did? Handling the media onslaught when Millersville University brought Bill Ayers (think unrepentant terrorist) to campus in 2009 is definitely a highlight of my career. I granted hundreds of interviews and at one point my photo was on the front page of the newspaper between Bill Ayers and the District Attorney. The University set up a special “hotline” for upset members of the public to leave their thoughts and my son got a kick out of listening to some of the outrageous comments left on that line.

Do you have your APR? Yes

How has that helped your PR work? The APR shows my employer, colleagues and the world that I know how to conduct research, strategic planning, implementation and evaluation, and that I am committed to professional excellence and ethical conduct. Being on the Universal Accreditation Board, which oversees the APR, has helped me keep on the forefront of what’s happening in the profession.

Best career advice you’ve ever received: The CEO of a PR firm I worked with long ago told me that when meeting with a client, boss, etc., that you should always have something to contribute. If you don’t have ideas to contribute or solutions to problems, you shouldn’t be on the call or in the meeting.

What do you do for fun? I’ve been a hiker and skier all my life and now I’m branching out and learning (very slowly) how to play golf. I also enjoy watching my son play tennis and soccer.
Through which media do you get your news?: Intelligencer/New Era of Lancaster, Sunday News, New York Times, The Daily Show.

First PR job: My first PR job was in the corporate communications department of Hershey Entertainment and Resort Company. I wrote news releases and feature stories about the HERCO properties, and also wrote the employee newsletter.

How/Why did you get into the PR profession? I worked for several years as a reporter and an editor on weekly and daily newspapers in central Pennsylvania. A big factor in making the switch to PR was the shrinking newsroom staff. I also enjoy using the broader range of communications tools that we have at our disposal in PR.

Most unusual/successful/funniest PR project you did? I spent 11 years as the communications and development director for an international boarding school in Germany. I liked working with people from other countries and learning how the bridge the differences between cultures and languages. While working there, I earned my postgraduate degree at the University of Stirling in Scotland with students from many European countries.

Do you have your APR? No

What do you do for fun? I’m a volunteer paramedic with Northwest EMS in Lancaster County. I’ve volunteered with them since 1980, except for the time I was in Germany. My regular shift for the past 10 years has been Friday night. I can unwind from my PR job by saving some lives.

Through which media do you get your news? Flipboard, news websites, and WGAL and the Lancaster newspaper for local news.

Ideal Job (if not PR):Paramedic in the alpine region of Switzerland.