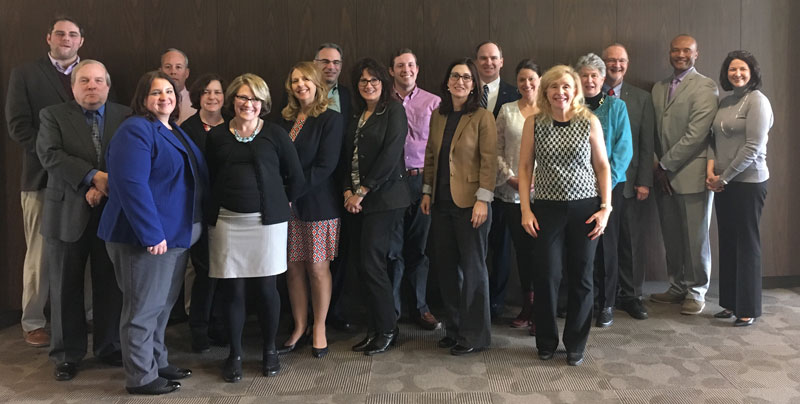 Pictured above: APR volunteers from throughout the district volunteered their time to serve as panelists during day one of the 2018 Mid-Atlantic District Boot Camp.

Amy HIll, APR, served as chapter host of the district boot camp on behalf of the Central PA Chapter and ensured everything ran smoothly from start to finish all while exhibiting the warm hospitality of downtown Harrisburg.

The boot camp sold out quickly and attracted 15 APR candidates. “Our district is the only district in the nation to sponsor an APR boot camp, and now we’ve conducted one four years in a row,“ said Liz Smith, APR, who served as Mid-Atlantic District chair in 2015 and spearheaded the boot camps with the help and support of PRSA National and chapters in the district.

Smith served as  day  one boot camp trainer to prepare candidates for their afternoon panels.  Amy Hill, APR, and Jason Kirsch, APR, served as trainers on days two and three of the boot camp.

Hill, Kirsch and Smith are all volunteers from the Central PA Chapter. APR candidates and panelists had positive comments about the boot camp.

Kathy Mulvihill and her staff from PRSA National reviewed applications, set up registration and organized panels.

“We had an outpouring of support from APRs from Central PA and throughout the district volunteering their expertise to serve on panels of three for each candidate,” Smith said. Numerous panels took place simultaneously during day one of the boot camp.

“Together we are paving the way to increase the number of APRs in the Mid-Atlantic District and across the country,” Smith said. “Most chapters in our district do not offer APR training sessions, especially with national-caliber trainers like Hill and Kirsch, so there is a real need for the district boot camp,” she said.

“The Mid-Atlantic Chapter’s APR Boot Camp was extremely valuable. I had studied the PRSA materials for a long time, and the boot camp helped me pull it all together to take the APR exam. It also gave me the chance to discuss real-life situations with PR pros from around the country. Not only was it helpful in earning my APR, it was fun to establish mutually beneficial relationships (to use PRSA-speak) with PR practitioners whom I now consider friends.”

“The number of participants at the boot camp was ideal, and it was helpful to hear all of the experiences of these high-level PR professionals as we worked through the KSAs for the panel presentations and the computer exam. The presenters, Liz, Amy and Jason, all did a great job of preparing us for both the presentation and exam and getting us thinking like the APRs we were to become. I feel like a more experienced and prepared professional for having attended it.”