The PRSA 2015 Leadership Rally for chapter, district and section leaders provided attendees with a wealth of information. “The meetings and sessions offered many opportunities to network and share ideas with chapter leaders in our district,” said Liz Smith, APR, MBA, chair of the Mid-Atlantic District and president of the Central PA Chapter. Also, it was great for Kevin Gaydosh, APR, chair-elect of the district, and Smith to meet with many of the presidents and president-elects from chapters in the Mid-Atlantic District to learn more about their needs. The district is very involved in mentoring and supporting chapter leaders and members. 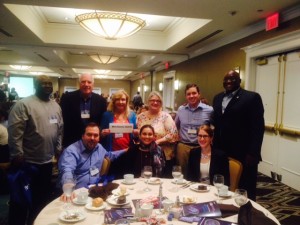 PRSA Mid-Atlantic District leaders pose for a photo with presidents and president-elects from chapters in the district.