Our own Mid-Atlantic District orchestrated the nation’s first district-level PRSA Accreditation in Public Relations (APR) boot camp in the country this month, and our Central PA Chapter played a leading role in the big success, resulting in many new APRs in our district.

The boot camp, held in Richmond, Va., April 16 to April 19, was almost two years in the making and quite a feat for the PRSA Mid-Atlantic District, which has the most members in the country. Every chapter in the district was involved in helping with the PRSA Mid-Atlantic District APR Boot Camp. Central PA Chapter volunteers led the effort and served as instructors and Readiness Review panelists.

Early on, to build support for the effort, Smith, as chair of the district and president of the Central Pennsylvania Chapter, enlisted the support of fellow chapter members and respected national APR trainers Jason Kirsch, APR, and Bob Saline, APR, PRSA Fellow. Then they brought Kathy Mulvihill, senior manager of accreditation for PRSA National, in for advice.

”Once the dates of the boot camp were confirmed, the district promoted the boot camp through multiple channels to Mid-Atlantic District members in January, and almost immediately 15 candidates registered,” Smith noted. Fifteen was the maximum number due to the number of seats available at Richmond’s Prometric testing center. Candidates registered from chapters throughout the Mid-Atlantic, with the majority coming from Richmond. Three candidates also attended from outside the district because it was promoted on PRSA’s national website.

Smith served as an instructor for day one of the boot camp, in addition to serving as a Readiness Review panelist. Amy Hill, APR, and Jason Kirsch, APR, both of the Central Pennsylvania Chapter and national-level trainers, served as instructors on days two and three of the boot camp. Testing took place at the Prometric Center on the fourth day.

Richmond Accreditation Chair Greg Surber served as Richmond Chapter host and was an APR candidate, too.

“The APR process is, rightfully so, a demanding exercise, testing your understanding of the public relations industry,” Surber said. “For the past several years, I’d considered pursuing it, but always stopped because I couldn’t commit one night a week for several months or attend a far-off training course. Being able to consolidate so much of that preparation into four days was invaluable, and I can honestly say without the Mid-Atlantic District hosting the APR boot camp, it would have been even more years until I finally decided to complete the process.”

Smith said, “It is wonderful that so many APRs in our district came together to volunteer their knowledge to help and advise the candidates and make the first district boot in the country a big success.” The Mid-Atlantic District chair noted, “The future of our district and all the chapters in our district is even more promising with so many new APRs.”

From left to right, boot camp organizers: Rachel Beanland, APR, president of the host chapter in Richmond, Va.; Liz Smith, APR, chair of the Mid-Atlantic District and president of Central PA Chapter, who initiated and led the boot camp effort; and Greg Surber, who served as chapter host for Richmond and became a new APR as a result of the boot camp. 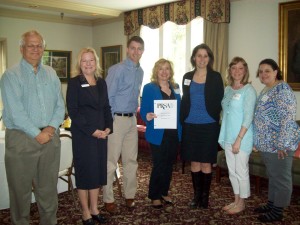