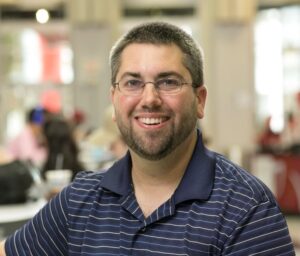 Andrew is a public relations and media educator who strives to help students connect their varied interests to the field of public relations. As the Lead of the Student Chapter Committee, Andrew serves as the liaison between PRSA Central PA and our local student PRSSA chapters.

Currently, Andrew is the Special Projects Coordinator for the School of Arts, Culture, and Society at Messiah University, where he teaches in the Communication Department. He has also taught at Central Penn College, Temple University, and most recently at York College, where he served as the faculty adviser to the York College chapter of PRSSA.

Andrew lives in Mechanicsburg with his wife, Stacey, and their two teenage children, Owen and Alora. When not shuttling his kids to sports, Andrew loves to spend time outside with his two golden retrievers. He also enjoys playing music, reading, and getting weirdly competitive with the New York Times’ daily Wordle. 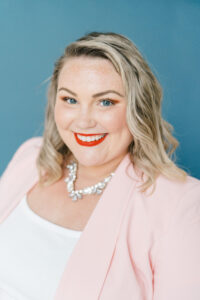 Maggi’s studies in public relations at Millersville University and integrated marketing and communication at West Virginia University led her to where she stands today – educating Pennsylvanians on public health initiatives through media initiatives. Joining the Department of Health during a global pandemic as Deputy Press Secretary, Maggi worked with her team to handle thousands of media inquiries, write hundreds of press releases and respond quickly to crisis situations. Prior to this role, she worked as Deputy Communications Director and Press Assistant for the Department of Human Services, the largest state agency in Pennsylvania.

After being heavily involved in Millersville University’s chapter of Public Relations Student Society of America (PRSSA) while an undergrad, getting involved in the PRSA chapter nearest to her seemed natural. Maggi has now been involved in our chapter for about five years and loves to meet new people, learn best practices, and find new ways to evolve as a young PR professional.

In her spare time, she enjoys exploring near and far with her husband, Corey, and her corgi, Duke. Maggi worked to establish a local corgi club that now has more than 500 members and gets at least 30 corgis together at least once a month.