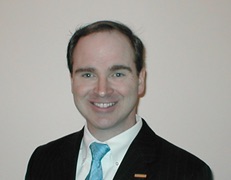 Tom is a Professor of Communication at Millersville University where he teaches public relations writing, research, and campaigns. He is looking forward to leading the chapter next year and is grateful to Molly, Holly, and Leslie for their continued mentorship in chapter processes.

He has been a faculty advisor for PRSSA chapters at Millersville University and, previously, Susquehanna University. Tom estimates he has taught more than 5,000 students in public relations and communication courses since beginning full-time university teaching in 1995. Since PRSSA and PRSA hold their international conferences in the same city, he takes great pride and joy in helping students realize their potential and understand the value of professional meetings like ICON.

Before earning his doctorate, Tom worked in public relations for the Pennsylvania State Legislature and as an associate news producer at WITF-TV. In his more than 25 years as a university professor, he has influenced many young professionals who have gone on to highly successful careers in public relations and digital communication.

In his spare time, Tom enjoys spending time with his daughter (Jessika) and two kittens. He also enjoys cycling and has been fortunate to have gone on cycling tours of Ireland, France, Spain, New Zealand, and Hawaii.