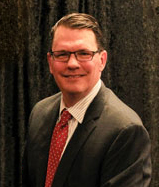 With great sadness, the Public Relations Society of America – Central Pennsylvania Chapter acknowledges the passing of our good friend, immediate past president and current treasurer and membership co-chair Greg Swartzlander.

We join his family and colleagues in mourning the loss of a talented, kind and creative man.

Greg was the director of digital communications at Select Medical in Mechanicsburg. He also served as an adjunct faculty member at Elizabethtown College.

Previously, Greg was director of interactive communications for the Pennsylvania Medical Society. He began his career in public relations as a producer and writer for a number of corporate and broadcast television productions and commercials, including serving as an area producer for the “Montel Williams Show” and ABC Television’s “Dick Clark’s New Years Rockin’ Eve.”

He held a master of science in communications studies from Shippensburg University of Pennsylvania and a bachelor of arts in radio-television-film from Temple University.

In addition to work and teaching, Greg was a passionate supporter of local marching bands, designing drills for a number of central Pennsylvania’s high schools. He was assistant marching band director for Cumberland Valley and Camp Hill.

He is survived by his wife, Christine, children Kira and Conor, and extended family. A celebration of Greg’s life will be held at 7 p.m. Friday, July 13 at Slate Hill Mennonite Church. Visitation will be held from 5-7 p.m. at the church.

In lieu of flowers, the family requests that donations be made in Greg’s honor to the Bluecoats Drum and Bugle Corps at https://bluecoats.com/shop/donations/greg-memorial/ or Bluecoats at P.O. Box 2733 North Canton, OH 44720.